skip to main | skip to sidebar

A Wet and Stormy Artisans Market

On the morning of Sunday 5th June 2011, the heavens opened and thunder and lightning streamed across the sky. But did this stop the people of Frome supporting the events happening in their town that day?......Nope!..... Not at all!
It was a very special day for Frome, as not only did we have the ever popular Artisan Market, the Frome Flea Market's second appearance (and it's proving to be just as popular as the Artisan Market) it was also the third appearance of the fun filled Cheap Street Fair too.
Frome's Flea Market
The Cheap Street Fair is in its third year now and even on a wet and windy day; it was still as busy as ever. This year's happenings at the Beach Themed Cheap Street Fair included beachy rides for the children, like the swing boats, live music, mouth-watering food and from the look of FromeTV's pictures, lots of fun and a few glasses bubbly.
Even, Deadly is the Female's resident poet, the delectable Muriel Lavender, was meandering between the three events. Looking stunning, as usual, Muriel was out promoting the Burlesque Night that is now happening on a monthly basis at Frome's Westway Cinema, organised by the enigmatic and ever so talented Venus Noir.
Here at Deadly is the Female, it was a special day too. Claudia and Gomez were taking a little break so the shop was looked after by the fabulous Tamara Dibsdale and Lolita Noir. It was a busy day for all and a remarkable sight to see so many people out to enjoy all the festivities, even in such terrible weather.
Tamara, dressed in the Sadie Dress in Bows Print, and Lolita Noir, wearing in the Billion Dollar Baby Dress in Black and the Pink Satin pumps, were on top form that day. They welcomed everyone in from the rain, to the fun and cheerful sounds of Imelda May, the Baseballs and maybe a little Britney!
Among the most popular items that day was the Doris Shirt in Black and Red and the Natasha Dress in Cherries. Not to mention the amount of compliments the Summer Dress, that is currently in the window, got.
Once again, the people who supported the Frome Festivities are to be congratulated. They truly made, what could have been a total wash out (pun intended!), a fun filled day.
﻿
Read More
1 comments 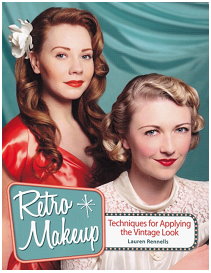 "After the conservative years of WW11 came to an end and the cosmetics industry caught back up with demand, makeup styles took the biggest turn seen to date.  Along with bright coloured kitchen appliences and couches, came bright and shapely makeup, with well defines eyebrows becoming the look of the day"


The base for the 50's style makeup was a foundation cream, creating a pale, mask-like complexion which was topped off by patting on a flesh coloured powder to set it.  Once your base was set, then "slowly, comes the metamorphosis"


The eyebrows of the 1950's were mostly thicker in the inner corner and then tapered out to a clean point.  But they varied in styles; the inner corner could be rounded or squared.  The ascent could be a straight line or pointed to a peak. A gradual rounded eyebrow was very popular, as was straight!  It was customary to take what you had, tweeze it to a clean line and then use a pencil to darken in and possibly thicken.


Next came eyeliner, by the mid 50's the winged/cat eyeliner was a very important part of the decades makeup looks, and that too had many variations, from striking to soft.  The various products on the market included pencil, liquid and gel eyeliner. The possibilities for the wing eyeliner were endless. By changing the length, thickness, flip (wing) and colour, the appearance of the eye and the rest of the makeup changed dramatically.
Lip shapes in the 1950's, for the regular girl, followed the basic shape of the natural mouth, but in Hollywood, they began to customise it! They began to taper the fall from the peak to the outer corner for a droop that almost mimicked a pleasant, innocent smile. Sultry movie stars like Marilyn Monroe and Sylvia Lopez were over-drawing their top lip for a fuller look.
The most duplicated look of the era is Marilyn Monroe's. Her blond 'bombshell' image, complete with sultry red lips and thick eyeliner, is one that has been sought after for many years.


By following these simple steps we will help you capture the essence of the 50's Bombshell look, with her glowing skin and sultry eyes. 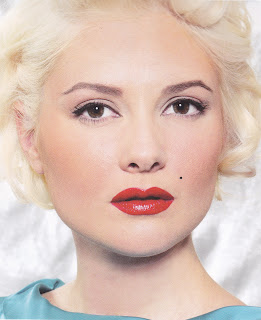 For more advice on how to acheive 'Retro Makeup', check out the 'Retro Makeup Book' by Lauren Rennells, sold at Deadly is the Female  (this book is currently out of stock but we will be getting more copies very soon)

Deadly is the Female
Deadly is the Female is a boutique & webshop specialising in 40s/50s style pin up, burlesque and femme fatale fashion - we have EVERYTHING a pin up could need...and now you can read a little bit about what we get up to!